I am envious of some people. I hate to say it, but I am.  I see them all the time, out on the street running along with their trusty four legged companion at their side, or human dog selfies on facebook with their running distance and time posted beside them.  The dogs look so happy and excited to be out for a run....I envy them.

I too have a dog, a cute as a dickens Miniature American Eskimo named Angus.  He's full of p&v, cuddles and kisses.  He's cute and he knows it and knows how to exploit it.  He also has a mind of his own.  A very large mind of his own for a dog in my opinion. 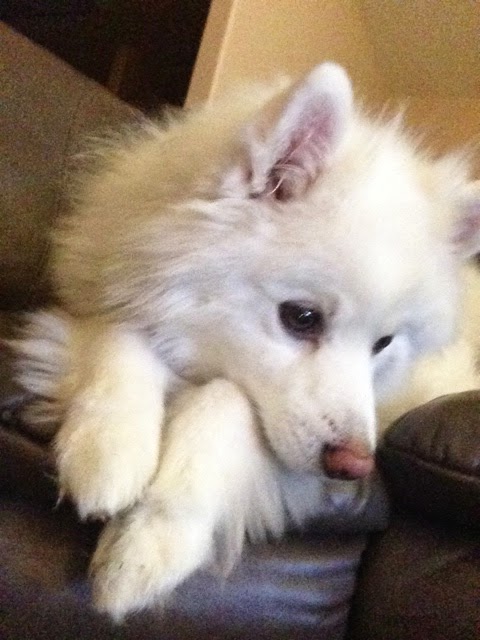 When he wants to run, Angus  runs like the wind, close to the ground, grunting as he goes, paws thundering on the grass.  The key part of that phrase is "when he wants to run".  He doesn't always care for running.  We'll start out with him trotting along beside me, looking up at me every few seconds with what looks like a smile on his face.  Then just as suddenly he stops dead, just about rips your arm off and sits.  Sometimes it's the oh, I'm just doing my business look, sometimes it's the I'm just needing to scratch my ear look.  Then there's the heck no, I'm not going another foot look. 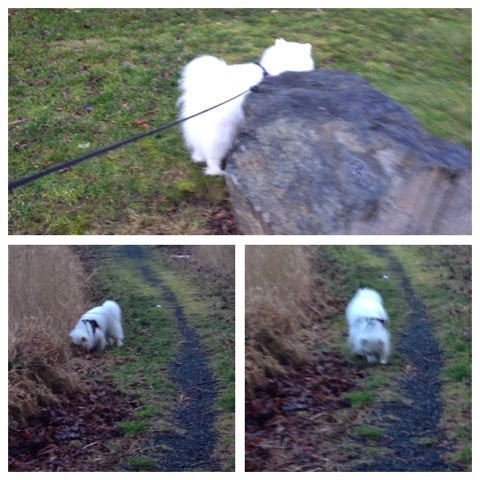 My plan a few nights ago was to run around our neighbour hood.  It was a beautiful day and I thought rather than go to the gym I would take Angus with me for a couple of laps, drop him off and then continue.  After seeing this video my husband sent me this in response to my email updating him on my plans, I went to the gym.

It was still light out when I got home last night, my husband wasn't home so I decided that I would go for a run, get some fresh air and drag Angus along with me.  He was excited to be going outside after being cooped up in the house all day and our first few intervals went well.  We were doing 4:1's and I had him on the zip leash so he could go a little ahead or behind me without slowing me down or causing concern.   He actually went longer than I expected without stopping.  It wasn't until we were along Parallel road in front of the Ramada hotel when he put on the brakes.

He stopped at the boulders to sniff, he had to sniff at each car parked along the side of the road, he had to sniff the grass...you get the idea.  After about five minutes of pulling and tugging and begging him to "Come on for the love of goodness, we're supposed to be running"  that I decided that the rest of the run was going to be at Angus's timing and not mine. :)  We eventually got going again although our running intervals were down to 2:1's and then 1:1's and well to be honest, I gave up on the running part and switched to speed walking.

I am envious of those who can just take their four legged friend and get a good run in.  If you're ever in Abbotsford and you see the heavy lady on the side of the road pleading with a white fluff ball of a dog, don't worry, it's just me trying to convince Angus it's time to run.
Posted by Katie at 8:26 AM