The rain still hasn't stopped, on the news they were saying we've gotten almost 100 ml of rain in 36 hours and we'll probably get another 40ml's tonight before it finally stops.  Oh well, what can you do?  If you're me, you bundle up, grab an umbrella and the dog and head out the door.  This was the ultimate plan.  Get out and do a nice 5km route around the nieghbourhood that would get us both moving.  This was the plan.  However...the plan didn't go...we as planned.

The rain was coming down in torrents and I have a dog who...let's just say he's very opinionated.  By the time we got to the top of the complex and out onto the street, we were both already wet.  By the time we made it down to the main street, my shoes were soaked through, my umbrella had been turned inside out twice and the poor dog's head was hanging lower and lower with every step we took.

By the time we made it half way around the horse shoe to the main road the dog was done.  He was having none of this rain nonsense.  He dug his paws in the ground, sat his butt down and started growling as I tried to coax him forward.

I was starting to feel a little defeated as it had taken us almost 10minutes to walk what would normally take us about four minutes.  It was then it happened.   The wind picked up and blew my umbrella out of my hands just as a bus went by and splashed me with water.  Throwing my hands in the air I told the dog we were going home.

Amazingly enough we made it back to the house in about 4 minutes flat.  Annoyed dog, wet squishy feet and all. 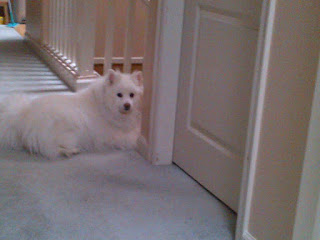 A very annoyed Angus almost dried after our walk 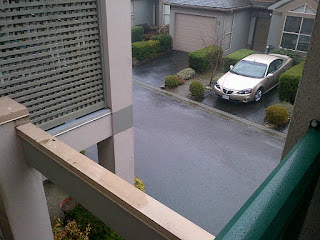 This is what we were trying to walk in....I now know better for next time.  I'll leave Angus at home :-)