I've just completed my longest race yet.  The Vancouver BMO 8K.  I've been looking forward to it since November when I signed up to do it.  Back then, I was just hoping not to get swept off of the course.  That was still my biggest fear.  Not finishing, or not being allowed to finish but I did it.

Friday after work, my friend Jill(who was running the full marathon) and I headed down to the race expo to pick up our race kits and take a look around.  I had a great time and I was so excited to get my bib and race kit.  When you first arrived they had the route maps done up so you could see the route. 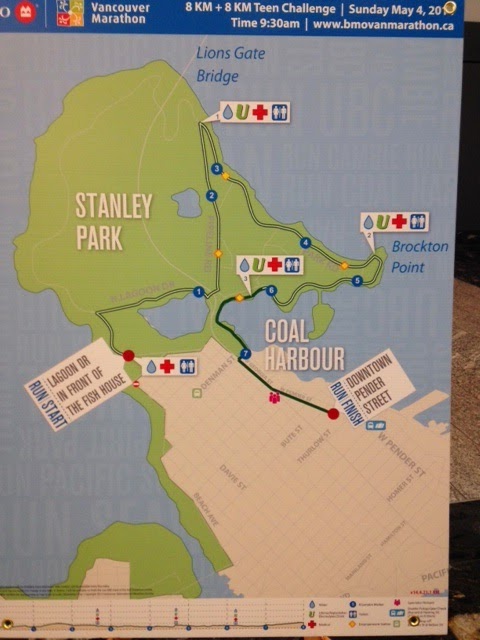 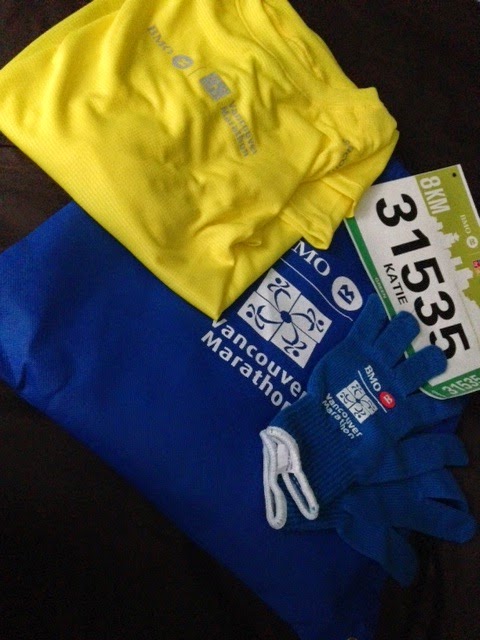 Sunday morning, I was awake long before the alarm, the alarm was set for 6am.  Awesome husband and I wanted to leave the house no later than 630.  The shuttles from the finish line to the start line were only going to be running from 730-830 and since this was my biggest race to date, both distance and the number of participants.  I didn't want to leave anything to chance, especially with the rain that we were having.  It was pouring rain all night and it was still raining hard when we left the house.


It takes around an hour for us to drive from home to Vancouver, and we were blessed with very little traffic on the way in.  We made our way downtown and parked at the convention centre, then made our way up the few blocks to the gear drop and shuttle pick up.   I had packed a dry bag on Saturday night so that I would have dry clothes to change into after the race.  Drop off of the gear went smoothly, I said goodbye to my husband and jumped on the shuttle that was about to leave.  The shuttle is greatly appreciated as the course is a point to point and there is no parking at the start line.  The only draw back to the shuttle, was that our particular driver dropped us off quite a distance from the start line, and couldn't even tell us what direction to go to get to the start line.

So envision, 30 people standing on a street corner in downtown Vancouver with no idea of where we were supposed to go.  Fortunately I had my cell phone with me and we were able to get directions off of it to get us to the right general area, 1.8km's from where we were dropped off.  Quite a few of the people were more than a little cheesed off, but what can you do?

I arrived at the start line area and headed up to street level to cheer on the half marathoners who were passing by, our start line merged onto the full and half marathon course.  Cheering everyone on and clapping for them was the only way to keep yourself warm.  It was raining so hard that even my "Rain" proof jacket was soaked through by the start of the race.  While cheering on the half marathoners I was fortunate enough to see a couple of friends and cheer them on by name as they ran past. 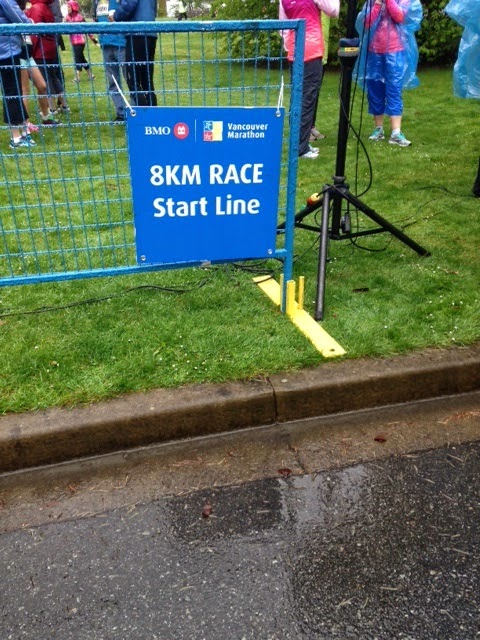 It was soon time for us to start, I made my way over to my corral and did some warm up stretches, before I knew it the countdown was on.  It was really crowded at the start, there were over 2000 people doing the 8K so it took a couple of minutes to be able to get going.  I decided to just walk the first little bit, as you couldn't really run, but a few minutes in the crowd spread out a little bit, and by the time we reached the underpass into the actual park, there was enough space to actually run quite easily.

The course through the park is beautiful, even in the bucketing rain, by the end of the 2nd kilometer my jacket was off and tied around my waist and I was really enjoying my run.  I stuck with my 3:1's as it was quite hilly in spots, and I knew that the finish line is an incline and I knew that I wanted to run it in. 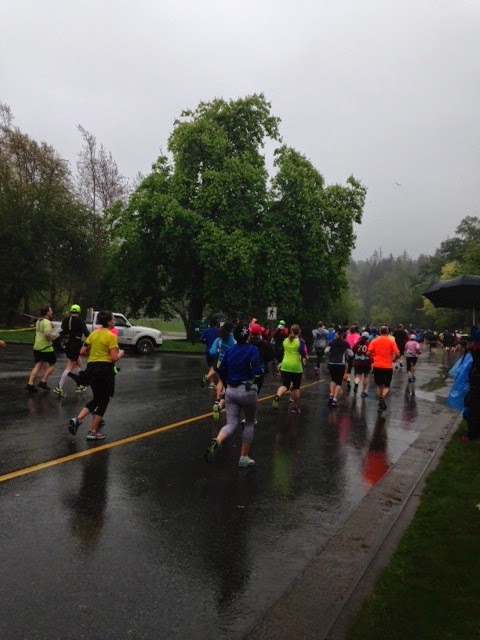 There were a lot of volunteers and people cheering throughout Stanley park, but I didn't really get the enormity of the race until we came out of the park, headed up towards West Georgia and took the turn onto Pender.  There were hundreds of people lining the route cheering and ringing cowbells.  Although I was tired by this point the energy from the crowd when I  came around the corner gave me.  The boost I needed.

I heard the police motorcycles coming up behind us and volunteers were telling us to stay to the right as the first marathoner was coming through.   He ran past me as if he was just starting his race and wasn't at the end of it.  It was amazing to see!

I was also lucky enough to see my husband along the fencing and managed to get a high five before I made the last dash up towards the finish line.   I was so proud of myself when I stopped my watch after crossing the finish line and saw that I did my 8K in 1:23:14.  http://connect.garmin.com/dashboard?cid=9638406  After checking Sports Stats who did the timing I was thrilled to see that I came in about 3/4 of the way through the pack, I finished 1406 out of 1868.  I wasn't the caboose! 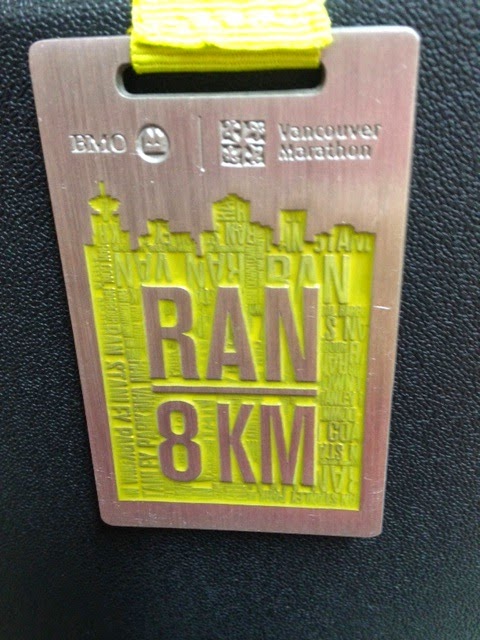 The  finisher's chute was very well organized.  After I crossed the finish line there were dozens of volunteers giving out the medals, you walked a few feet and stood where there were a bunch of photographer's to take your picture, after that was the water table where you were handed your bottle of water,  a few more feet down and the volunteers were handing out the nutrition boxes, then for us 8ker's we headed out of the finishers chute to go down to the festival area where our gear was waiting for us.  My only complaint about the gear being where it was, is the fact that they didn't provide a change room for the 8K people to get changed in, and once you had left the finisher's chute you weren't allowed back in.  It was great to have the dry bag, but not so great that there wasn't anywhere to actually go and get changed other than a port a potty.   I opted to walk back to our car and get changed in the back seat where the windows are tinted with my husband standing in the door holding up my towel.

After I got changed and we stopped at Starbucks to get a nice warm drink, we headed back to the course so we could cheer on the marathoner's as they came through, I wanted to cheer for my friend Jill as she came through.  She figured she would be around the 4-4:30 time frame as she was using the marathon as a training run for her Ultra Marathon that is at the end of May.  Once we cheered Jill to the finish line we headed back to the car to warm up and head home.

All in all, it was a great day.  I had a lot of fun, and I really think I could have gone further if I had signed up for a further distance.  The 10K race I had signed up for in June has been cancelled so I need to figure out where I can fit a 10K race in before I tackle a 7 miler in October, and maybe, just maybe, I'll be back at the BMO next year to do the half marathon.