I've been on this weight loss journey for over a year now.   It's had it's ups, it's downs, it's surprises, it's losses, it's gains, it's plateau's.  The hardest plateau was almost 5 months in length, between July - mid January, I seemed to lose and gain the same 10 ounces or portions there of, over and over and over and over again.

I don't know what really kept me motivated, maybe it's because even though the weight wasn't going away, I was more active.  I was walking dozens of kilometers a week and I was happy with myself.

I had some pretty major milestones in there.  I did my first 5k race, the Abbotsford Police challenge, followed by 5 more races by the end of December.  I started shopping in department stores instead of just the one or two plus size stores I've been using most of my adult life.

So many things have changed and when I get frustrated I look back and remember all the good things that have happened in the past year.  I've come off almost all medications.  I'm in a running clinic, I've signed up for 6 races so far this year with an ultimate goal of 14 races.  I've had some good moments and some bad moments, and some aha moments.

The biggest "Aha" moment for me came last night.  I had to get a new phone recently, my old phone finally gave up the ghost.  I was looking through the pictures that were transferred onto my new phone and I went back a year, there exactly a year ago was a picture my husband took of me when I came home from my first long walk.  I was tired, sore and I had worked up a sweat.   I showed my husband the picture and he was amazed, I don't really see the difference in myself so we took another picture, with me standing in the same spot, the same pose.   I then used an app on my phone to put them side by side, and when I did, I got very emotional.   I can't believe the difference in how I look. 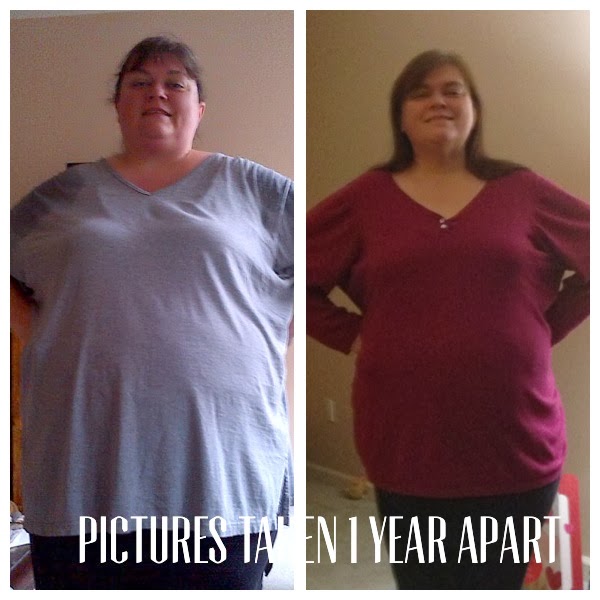 I still have a long way to go.  But now, when I'm frustrated, if I hit another plateau, if I don't feel like exercising, if I want to just sit and eat junk, I have something to look back on.  I have something that I can be proud of.