I know, a weird title for a blog post but for the past 52 hours or so, that's all that we've had, snow!

I went to weigh in on Saturday morning, it had been snowing but nothing had really been accumulating much.  My weigh in went well, I'm now down 77.8 pounds. Yeah!  After weigh in I went home, changed into my running clothes, grabbed the dog and off we headed for what I call our "wog" (walk/jog)  I figured the dog would be accomodating as the snow was starting to stick and he loves to run in the snow. 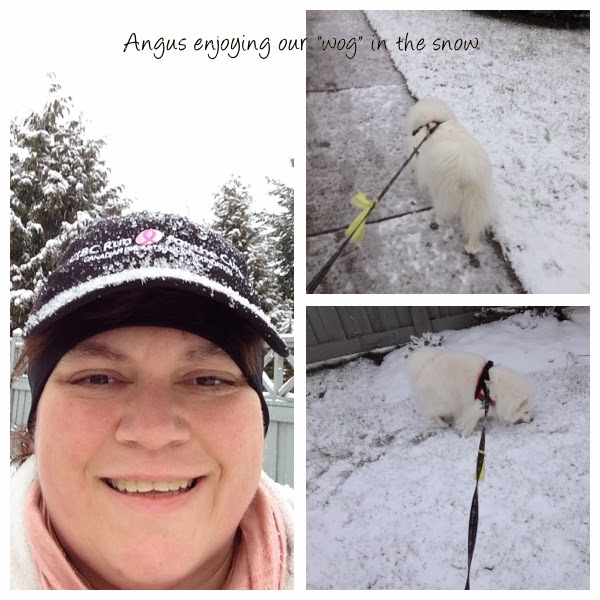 We only went around the block once, as the sidewalk was getting slick and I slipped a couple of times coming up the hill, so back to the house we headed.  The rest of the day was spent doing the grocery shopping and then the ton of laundry.  By noon it was really coming down outside so it was decided we would have an inside day the rest of the day.

We woke up early on Sunday and lay in bed watching the gold medal hockey game.  It was exciting to see our men's team join the ladies as gold medal winners in hockey.   We were supposed to go into Coquitlam today but with the snow coming down and the roads bad we decided to stick close to home.  We took Angus for a walk around the block.  It was so cold and snowy.  This is what our back yard looked like by mid afternoon. 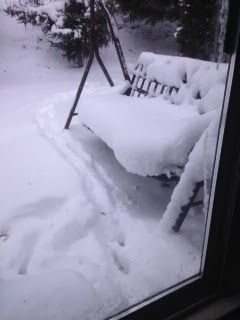 I don't think I'll be going for any "wogs" in this kind of weather.