To be perfectly honest, I didn't end the year in the stellar fashion in which I originally planned on this year.  When my husband and I came back from holidays in August, running fell to the bottom of the pile for several reasons.  Despite the fact that I was signed up for two more races.  Despite not training properly, I still participated in the Rock 'N' Roll, Cunningham Seawall 10K on the last Sunday of October.  I had signed up for this race just after doing the Run for Water and thought I would do great.  All intents and purposes were in the right places but the follow through sucked!

If I could give one word of advice to anyone it is this, if you are signed up for a race, make darned sure you train for the sucker.  The race itself was well organized for the most part, but for me it was a horrible experience, one that I will never, ever forget, live down or want to repeat.

It started shortly after crossing the starting line, some 20 minutes after the starting gun went off, they let us out in waves with about a minute between waves.  I started out running down hill, and went around the first corner and that's when I got my first cramp.  I would love to be able to say that it was my only cramp but it was just the beginning, by the 2nd kilometer, I had had cramps in both calves and in my right shin.  I was in so much pain it wasn't funny.  My thoughts of running the race slowly faded as the 5K mark came and went and I was walking more than I was running.  My calves were being kind enough to cramp in turn, one would stop and the other would start, then the cramp would spread around to my shin, down into my ankles and finally make my toes curl.  To say it wasn't fun would be putting it mildly.  My Run for Water 10K finish time came and went and I still had 3K's to go.  I was only walking at that point and I was hoping that maybe just maybe I would be able to run it in.  As I got closer to the finish line and saw the last charity cheering station I could hear the announcer's voice and I wanted to run it in so badly.  I tried to run and the calf cramps came back with a vengeance.  I almost fell it hurt so bad.  I was feeling very dejected and disappointed in myself that here I was hobbling along to the finish line barely walking as the time creeped closer and closer to the two hour mark.  It was all I could do to keep going.  When I finally crossed the finish line I was crying.  I just wanted to go home.  I was handed a bottle of Gatorade, had my picture taken and hobbled to the family meet and greet area to meet up with my wonderful husband who had been waiting patiently for me.  It was a hard race, and I was in pain, but I do have the medal hanging proudly on the medal holder as I earned it. 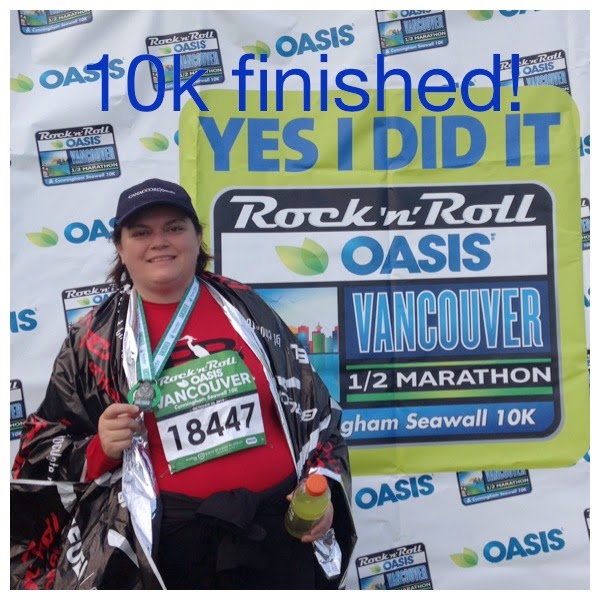 A week later was the Boundary Bay 5K!  I had originally been signed up to do the 10K but the day after the Cunningham Seawall, I e-mailed to see if it would be possible to change my distance.  They gladly did, and I was relieved to be doing a 5K, but again, not running as I should have been I was ill-prepared.  I ended up having a pretty rough run, although I did manage to do my run/walk intervals but when I looked at my time this year compared to last year, I was a smidge slower this year. 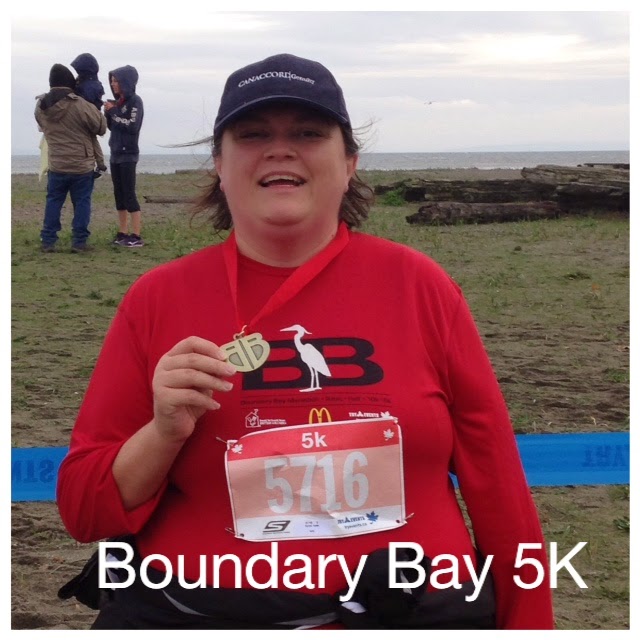