It was a crazy busy week for me this week.  As a special events officer for the Alzheimer Society of B.C. it is my job to plan and execute fundraising events. This week was event week for us for A Breakfast To Remember. A fundraising breakfast with two guest speakers and about 200 people in attendance.

Event weeks are busy and on Sunday after my long run, I planned out my week, meals, activity and runs. The only thing I hadn't counted on, was getting sick!

I woke up during the night on Sunday-Monday with a tickle in my throat, by the time I left for work just after 6am I had a headache, by 1:30 I was feeling horrible and texted my car pool partner to see if she could leave early. My throat was killing me and the headache hadn't stopped all day. I was in bed before 7:30 which is super early for me. Tuesday I wasn't much better, my throat was sore and I was a little worried. I had to get through the event on Thursday and there was still stuff to be done.   I had no energy, no appetite and when I got home from work I fell onto the couch and stayed there. No Tuesday 8K run for me!

Wednesday I wasn't any better. I had no voice and my co-worker and I were heading to the venue to set up.  My co-worker managed to get us into the venue early for set up, which was fabulous!  We were able to start setting up at 4:30 pm instead of 6, which meant I was able to go to the hotel, and be in bed before 8pm. 5am was still going to come early but it was good to be finished a good 2 hours ahead of schedule.

The room was set up, the tables were set with programs, the displays were set up and the name tags were laid out. 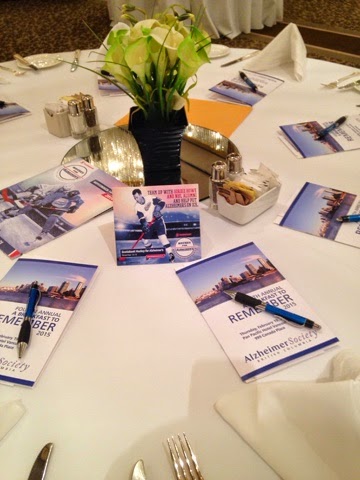 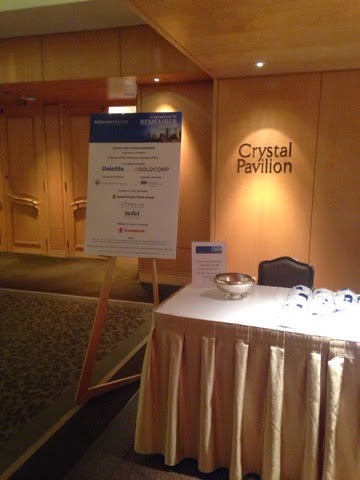 Doing all of this the night before meant that we wouldn't have to be there until 6ish instead of 4:30 am on event day.

I had set my phone alarm for 5 am and fell asleep around 1130pm. I kept going through the run of morning in my head double checking details. I was sound asleep when the hotel phone rang at 3:30 in the morning!!  I guess the previous guests had an early flight to catch or something.  None the less, that was me wide awake and ready for the day. I finally gave up on getting any more sleep, got ready for the day and headed to the venue.  I was there by 5:20am!  Oh well.

I made it through the day pretty well with most of my voice. I was exhausted by the time I got home and I knew that although I had planned to go to Run clinic it wasn't physically possible. Instead I headed to bed.

I woke up Friday morning feeling as though I had been run over by a truck. I had no voice again and it hurt to swallow.   I called my doctors office and was extremely grateful that they could squeeze me in.  While there I told my doctor about my 10k race on Sunday. He just smiled the way he does and told me the only place I was going was to bed!  He gave me a prescription that is starting to work and I headed home.

My wonderful husband took my doctors orders to heart!  I haven't been allowed to go anywhere or do anything for the past 2 days. Instead of being at a race today this is what I've been doing. 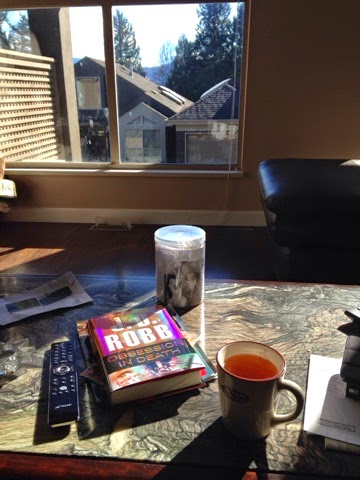 Sipping tea and reading a new book. Hopefully I'll be feeling better by the time I go over to Victoria on Monday to help with their A Breakfast to Remember.  Even more so, I hope to be back to running my 8K on Tuesday.