Wow, where did the week and the long weekend go!  I can't believe its Easter Monday already and my fabulous 4 day weekend is almost at an end.  It was a great weekend though, filled with some great work outs and runs.

Thursday night was regular Run Clinic night. We had our new leader Jason (Rick our previous leader has a knee injury and had to bow out).  There were only three of us for clinic, I guess because of the start of the long weekend, but we were primed and ready to take on our 4:1's  this week. (an easy pace week as we jump up to 8:1's next week) We asked Jason if we could mix it up a little bit, maybe do a new route or do our regular route the opposite direction.  He decided that we would do our regular route in the opposite direction and for next week he'll map out a new route for us to take.  I don't know if it was because the route was in the opposite direction or not but I seemed to be running faster.  It seemed that the others weren't getting as far ahead of me as they previously were and when I looked at my splits and compared them, they were better than the previous couple of weeks.
One of the ladies two sons joined up with us about half way around the route(they are training for the marathon) and I was actually able to talk to one of them as he dropped into pace beside me and talked with me through out two intervals.  It was great!!!!  I felt really good afterwards as well and didn't have any issues with it. http://connect.garmin.com/splits/481887988 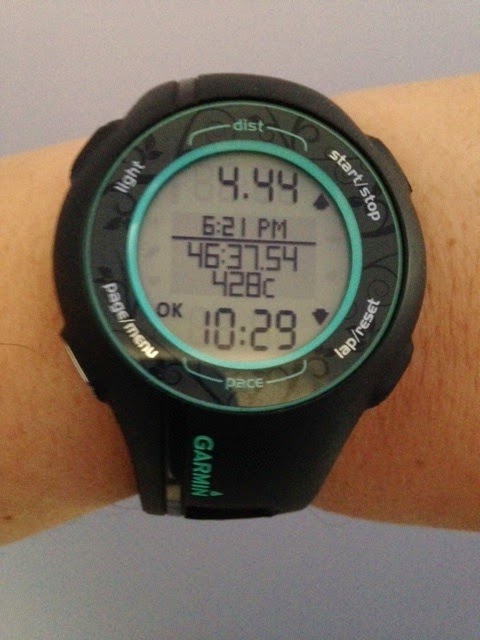 After my weight watchers meeting on Saturday (I was up 1oz, I really do hate these little losses and gains, they drive me nuts!)  My husband and I went over to my parents in the morning to see Maxwell (their dog, see previous post) one last time. Saturday was also Run homework day. I decided that as my 8K race is only two weeks away and I have yet to run a distance longer than 5K I would run home. My homework was 3:1x7, but I doubled that to 3:1x14 so that I would actually be running most of the way home.  I was feeling pretty heavy hearted when I left my parents house and honestly wasn't really in the mood to run, but I had decided that I was doing it, and that's what I had to do.  I'm glad that I did go running.  I was concentrating on what I was doing and counting along with my steps.  I had some great splits and some not great splits, but considering I had some major hills to tackle and a major head wind 90% of the time, I'm quite happy with how I did.
http://connect.garmin.com/splits/482956686 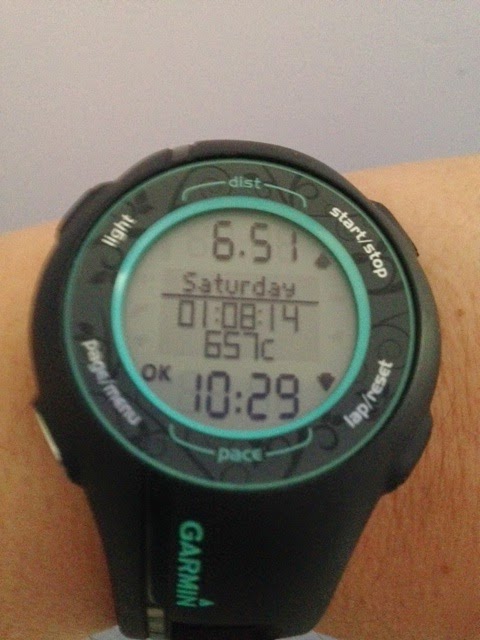 I know that I need to focus on getting consistent with my pace, but I'm not going to worry about it right now.  I was however thrilled to pieces to complete the 6.5K run in 1:08:14, that included the 4 minute walking warm up and cool down.  I felt so good when I got home. I was so energized it was great.

This morning, after laying in bed for an extra hour while watching the Elite Men and Women in the Boston Marathon, it was time to head out for my run.  I had 2:1x10 on the homework schedule today, so decided to run out to an elementary school about 4k's away, and have my awesome husband pick me up.  I headed out and was actually disappointed when my watch would beep a rest period.  I wanted to keep running!  I remember in January and February dreading the run clinics when we would run for 1minute and then 2 minutes and today all I wanted to do was run for longer.  I stuck to the homework though and before I knew it, I was at the school.  I once again underestimated how long it would take me to get there so I had to run around the school and then headed back towards home before it was time for the cool down walk.  When we got home, my awesome husband downloaded the information from my garmin and holy moly there were some great splits in there!
http://connect.garmin.com/splits/484470727

With this weeks runs; the time I did them in, the splits, and how I felt after each one, I'm quite excited and confident in my ability to not only run the Vancouver BMO 8K race on May 4th, but do it well within the allotted time.  I am so excited about this race.  It will be the largest (2500 8K runners) and the longest that I have done so far.