Best laid plans have a way of working, just not perhaps as well as one would like.  I had the opportunity to travel for work this past week.  On Friday I went to Victoria to meet with our new Vancouver Island Run Coordinator and show him and the Victoria Volunteer Coordinator how to use our volunteer software.  I had planned my meals for the day and knew exactly what I was going to eat and where.  I had breakfast at home, and as I was driving and taking the ferry, I packed a lunch and snacks to go with me.  I knew that I wouldn't get a lot of walking in so when I found myself at the ferry terminal with almost an hour before my actual ferry ride, I did what any self respecting lady trying to get fit would do.  I paced around the parking lot :)  http://connect.garmin.com/activity/317970131

When I arrived in Nanaimo, it was too late to go for a walk, so I settled in for the night, read over my presentation a couple of times and went to bed fairly early for me on a Friday night.  The result was being wide awake at 4am.  I waited until 6 and then headed out for a walk, 2.5km's in 30 minutes.  I was a happy camper with that! http://connect.garmin.com/activity/317970112

The rest of the week, although I tried to plan for it, didn't quite go as well as I had hoped.  I worked on Sunday at a trade show, although I did walk around quite a bit talking to people, I only managed to get in 11,225 steps, and that was with taking the dog for a walk!  Monday didn't fare much better I did get my steps in, but I still feel as though I could have done better.  Tuesday was a disaster, I only managed 9,733 steps, no where near my 12,000 per day goal.  I was a little disheartened as I knew that I would be travelling on Wednesday and Thursday and I wasn't sure what sort of activity I would get.

I put a plan together and for the most part I stuck to it.  I was up and on the road at 445am to take the West Coast Express into Vancouver and then the Canada Line out to the airport where I was flying to Prince George.  I knew that I would have to eat out for two days and so I made a meal plan in my head.  I would have oatmeal and fruit for breakfast, a salad for lunch and then as healthy a dinner as possible.  I think I did all right.  When I got to my gate at the airport I was delighted to find a Starbucks.  Their Perfect Breakfast oatmeal is only 3PP without any of the toppings!  I also picked up a fruit salad which was 0 points as it is not packed in juice or syrup. 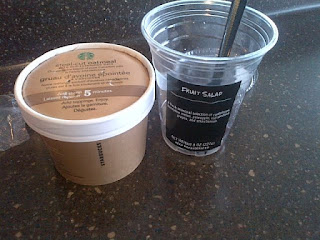 I was very happy with that choice.   When I arrived in Prince George and picked up the rental car I drove around to get myself familiar with where I would be staying and where I would be doing my training.  As I was driving from the meeting place to the hotel I spotted a grocery store that I know does salads for lunches.  I headed into the store, picked up 2 banana's, and a spinach salad.  Perfect lunch and snack.   That evening I had no choice but to head to a restaurant for dinner.  I ordered a grilled chicken burger, hold all the sauce and cheese and asked for veggies on the side instead of fries.  I honestly think that my waitress thought I had lost my mind.  She came back to me twice to ask what sort of veggies I wanted.  I told her whatever they had was fine with me. 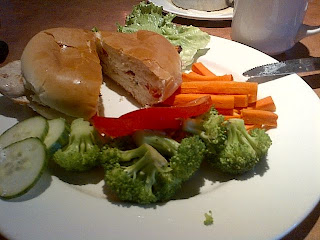 Well whatever they had turned out to be some carrot sticks, some cucumber slices and some broccoli,  Not bad for a 12PP dinner.

I was hoping against hope that because I managed to get in 12,534 steps during the day on Wednesday I would do all right.

Thursday didn't work out quite as well as I had hoped.  I only got in 8148 steps. I tried using the fitness centre at the hotel but their elliptical is much smaller than the ones I'm used to and the treadmill....well, to be honest the whole work out was a struggle and a mess.  It didn't not look pretty!

The two flights in twenty four hours affected my legs as I knew they would and I am retaining water like it's no one's business.  I still don't have any ankles tonight.  Water retention is not a good friend when it happens to be weigh in day.

I was honestly dreading weigh in this morning.  I even told my train buddies that I didn't want to go because I knew I was retaining water.  I knew that I wasn't going to have a loss.  I was prepared for a gain, and honestly, I 'm happy with what I did gain.  I gained 6oz according to today's weigh in.  Considering I didn't have a weigh in last week as I was on the road, I'll take that 6oz gain like a champ, knowing full well that next week, I'm going to have a loss!