After last weekend's snow and our cancelled Run Clinic I wasn't too sure how the Vancouver Hot Chocolate 5k would go for me.  The weather man was calling for snow on Saturday March 1st so when we went to bed on Friday night, I wasn't sure if I would actually be doing the run as we had to drive an hour into Vancouver's Stanley Park to do the race.

I was very relieved when we got up on Saturday morning to see that we didn't have any snow, it was very windy and very cold so I dressed in layers and headed out to my weekly  Weight Watchers meeting for weigh in, I was down another pound, almost at 80 pounds lost now!  (Happy Dance, Happy Dance).  I coudn't stay for the meeting as we had to get going to Vancouver for the Race.  When we arrived, I was pleasantly surprised by how warm it was compared to at home.  I left a layer of clothes in the car and headed from the parking lot to the race start line with my awesome husband who comes to almost all of my races to support me.

The set up was great, the start/finish chute is always really well marked, they had a nice warm building for us to wait in, a lot of stuff for after the race bagels, oranges, fruit, gatorade, water and of course Hot Chocolate. :)  There were plenty of places to sit and relax before it was time to head out for warm up.

This was the inaugural Hot Chocolate Run, but like all of the races that Try Events does, it was super organized, with a great atmosphere and wonderful volunteers.  We had our warm up outside, and then the 10K runners were off, a few minutes later, after letting us 5ker's know where the turn around point would be we were off.  The course started at the Stanley Park Pavilion, over the bridge and past the Yacht club, past the 9o'clock gun and turned around almost at Brockton point to go back.  Here's the route if you're interested.  http://connect.garmin.com/activity/456301572

There seemed to be a group from a Run Clinic just in front of me so I focused on following them and trying to stay as close to them as possible.  I seemed to be doing opposite intervals Run/Walks to what they were doing so we kept passing each other.    I'm used to being the turtle at all of the run's I've been to so far, it doesn't bother me, I just keep on plugging along usually trying to keep someone in sight.  The scenery around the Stanley Park Sea Wall is spectacular and I did take a couple of seconds once in a while to take some photo's. 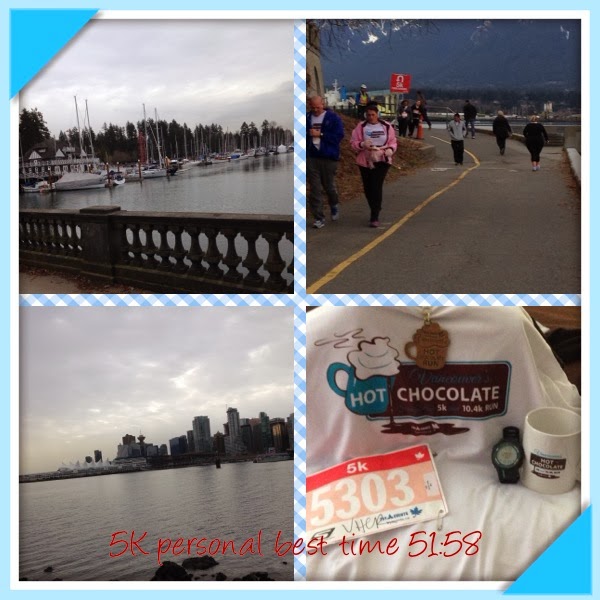 I was so thrilled when I got to the turn around point and started back to see that there were still people behind me!  I was so excited that I sent a text to my husband to let him now that I wasn't the Caboose!   As I was following the path back toward the finish line, we had to go UP the bridge this time,  and it was at that point that the 10k runners were meeting up with the us toward the finish line.  I decided as I reached the top of the bridge, where I could see the finish line that I really wanted to run it all the way in, although I was well over my run interval and should have been walking, I kept running.  Holy moly were my legs burning by the time I finally crossed the finish line.  I was absolutely thrilled though when I stopped my watch at the finish line to see that I had a personal best 5k of 51:58.  I was thrilled.  I ran more than in other races and looking at some of my splits I ran faster as well.  I couldn't be happier with how it went.  I think the look on my face says it all.

I have another Try Events race on March 16th, this one is a flat course, so I'm hoping that maybe just maybe I can cut a little more time off and have another great run!