I did it!  I did my first official 5KM race today.  I was nervous this morning, I had so much energy that after I got dressed, I ended up pacing the house.  It was too early to leave for the race, but I just couldn't sit down!

I drove to the Run Site, parked and pinned my bib on.  I went looking for my sister who is the race organizer.  I wanted to see if there was anything I could do to help her out.  She had everything under control with a fabulous number of volunteers ready to go.  I chatted with a couple of people I know, my brother in law and his best friend.  Before I knew it, it was time to head over to the stage area for warm up.  A few minutes later, the national anthem sung and speeches by the dignitaries, it was time to head out.  The 10km runners went first, then the 5km runners and finally us walkers.

I started out in the middle of the pack and quickly found myself toward the back of the pack.  I guess there were just a lot of fast walkers doing this race.  I was determined not to let that bother me and I decided to try to keep up with two ladies who were walking at a good pace just a head of me.  I did manage to stay with them for the first 10 minutes or so but then I wanted to do my intervals so I started jogging for 40 seconds and walking for 1minute and 10 seconds.

The whole rest of the race, I would pass a woman pushing a wheel chair and then she would pass me, we seemed to be running intervals at different times, I was resting when she was running and she was resting when I was running.  Her name was Darlene and her companion was Bob, an older gentleman who was just excited to be there, honking his horn and calling out hooray to people who passed him.

I was really conscious of my pace and kept checking my Garmin to make sure that I was on target, I figured I needed to walk about a 12min km, which is pretty normal for me.  I was surprised to see that I was actually in the 11-11:30 min pace.  I think I have to attribute that to the play list I downloaded last night, and the fact that I didn't want to be the last person to cross the finish line!

I was thankful for the water station at 2.5km's as my throat was really dry, probably because I've just started learning to run that I breathe in and out through my mouth.  I made sure to thank all of the volunteers as I came across them, the Road Marshall's, the water station attendants and the people cheering the runners and walkers along.

I kept my intervals up through Km 2-4 and then planned to walk the last km.  It turns out with Bob and Darlene pacing me, I decided I had to do a couple of more intervals and I ended up running down the lane to the finish line.  I got such a sense of pride and accomplishment as I did that as I knew there were a few people still behind me.

I was completely shocked when I stopped to get my finisher's medal and stop my Garmin when I saw the time on it.

Once I was done talking to him I saw a friend of mine from the Run for the Cure Committee, and she took my post run picture for me.

I made my way over to the food area where they had so much food, they had bunches and bunches of banana's, Costco Muffins, Pizza and Ice Cream.  Keeping my points in check was important so I just took a banana and a bottle of water.  I have to say, the water really hit the spot!

When I got home, I was interested to see where I ended up overall for the race and I went to the Race headquarters page to look up my details.


So 21 out of 23 isn't bad, or so I thought until I looked at the page that shows my age group and the other 2 ladies didn't actually do the race.  I'm still happy with how I did and I'm proud of the fact that a year ago I wouldn't have done this at all.  I would have been too self conscious and too embarrassed to register for a race.  So yes I may be slow, but hey!  Slow and Steady finished the race!

I'm really proud of what I accomplished today! 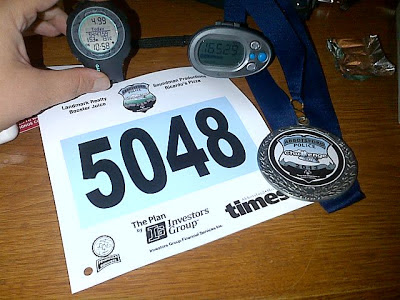