What a beautiful day to have my second official 5K race.  The sun is shining, the sky is blue and it finally feels like summer has arrived!

The alarm clock went off bright and early at 6am for me to jump out of bed and get ready for race day.  I was very excited but a little nervous as well.  My husband and I drove out to White Rock to pick up my race kit yesterday and we decided to check out the route.  The volunteer at the kit pick up said that the 5K route was easy but there were a couple of hills along the way.  There went my hope that the race was actually going to be along the waterfront on the promenade but oh well, you can't have everything. 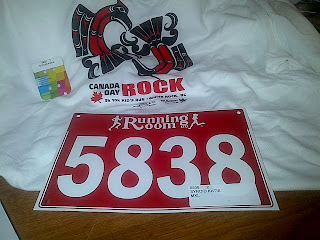 When we arrived we managed to get parking right at the park which was nice.  We were a little early so we stayed in the car for a bit and then headed up to the road for the warm up.  I was expecting a staggered start as that is what the website said, however I guess the Emcee changed the plan and had us all line up at once.  As I was a 5k'r and a walker I headed towards the back of the line and I'm fairly certain I was one of the last people to start.

I walked a pretty steady pace until I hit the 1km mark and then I started adding in my intervals.  I didn't do a lot of running as 1, it was UPHILL, and 2.  It was hot!  While I was on the flat stretch at about 1.5-2 km's I did my intervals and tried to keep up with a couple that were ahead of me but they were walking much quicker than I was.  I did manage to pass a few people as I walked so at least I knew I wasn't the slowest one in the field today :)

The route was a 2.5km loop, before I even made it to the 2km sign the 5K Runners were already heading past me.  That took a little bit of wind from my sails for a little bit but I kept plugging along.  I was very thankful that I took my own water bottle with me today.  I was drinking before the 1km mark and the only water station was at the turn around. 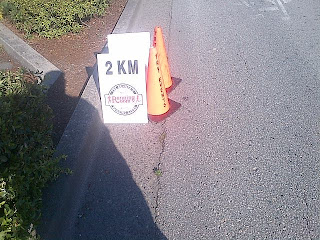 I struggled a little bit with the hill on the way out, it was a little steeper than I was expecting it to be but I managed to keep my pace steady at a 12:05 pace while going up it.  I made up a little bit of time going down but as I went down I got a little worried, I was going to have to go back up this hill!  The 2km mark was the beginning of the hill, the 3km mark was half way up the hill.

The scenery was beautiful coming down the hill towards the park.  I don't know why I didn't notice it before then, I guess I was focusing on making it up the hill, keeping my pace and my breathing . My asthma kicked in a little bit, I think because of the heat and the hills but I didn't have to stop to use my inhaler so I'm happy with that.


Once we made it down the hill, we had one more incline to go up, I won't call it a hill because after the hills in the middle of the course it wasn't a hill, just an incline.  As I started up the incline I had a lot of 10K runners passing me.  Several called out good job as they passed me and one man patted me on the shoulder as he went by telling me to keep up the good work we were almost done.  That gave me some energy to get my pace up again.   Before I knew it my wonderful husband was on the sidewalk holding his hand up for a high five as I started down the finishing chute.

I was so happy to be finished.  It took me longer than the Abbotsford Police Challenge but not as long as I figured.  My goal was to finish in an hour and ten minutes.  I finished the Rock on the Rock in 58:20.


I'm also very proud of my finisher's medal.  It made me feel really good to have that volunteer hand my medal and tell me Great Job as the Emcee announced my name after crossing the line.
Then to top it off, my name was announced as one of the door prize winners.  I won a Brita Water bottle with a filter in it!  We hung around for a little while, had some breakfast and listened to the band before we headed home.  It was a great experience and I've already signed up for my next race  The Rubber Ducky 5K in October.